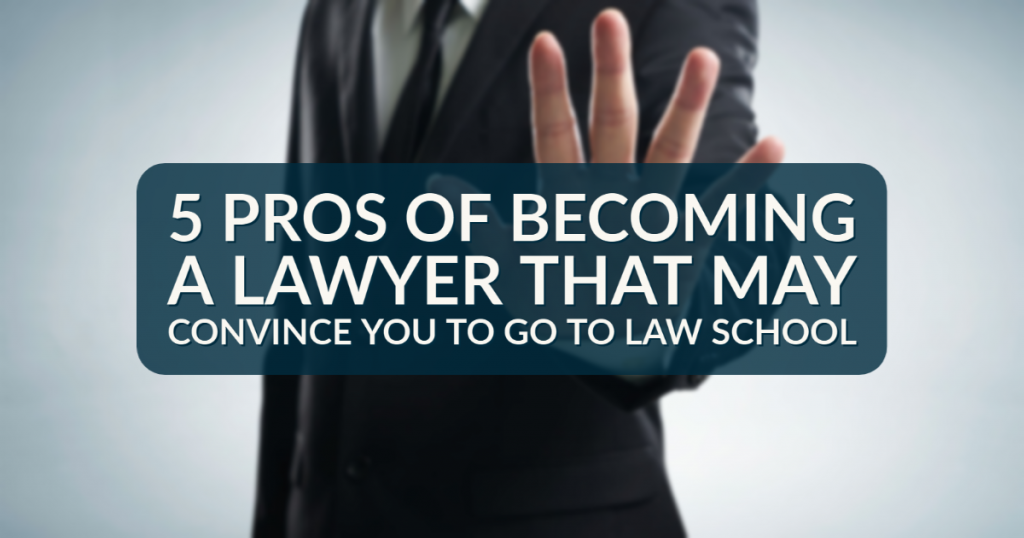 Have you ever considered getting into the legal field? It’s a big decision, especially since Americans have a longstanding love-hate relationship with legal professionals and attorneys. Yet they also put more dollars into litigating civil cases than other nations’ populations. In fact, plenty of people turn to the law on a regular basis. That’s one of the pros of becoming a lawyer: You’ll always be needed in some capacity.

You Can Help Families Grow and Communicate

Is working with families and trying to keep the peace between divorcing couples with kids something you’d enjoy doing? Do you dream of being able to make sure that your neighbors get along better? Joining a family law firm as a professional specializing in separations, divorce mediations, child support issues, alimony, and related concerns might be a good career path for you to take.

It’s great to know as an attorney that you’ve done your best to ensure that contentious divorces don’t hurt the kids. After all, they still deserve their promised dirt bikes for an upcoming birthday, even if mom and dad have decided to part ways. Though children and teens of divorce might not ever realize how much you did for them, you’ll have a deep understanding of the difference you made.

In your capacity as a family lawyer, you won’t always be dealing with difficult clients or challenging situations. Many family lawyers focus on happy moments, like the adoption of a child. Being able to unite families through adoption is absolutely one of those pros of becoming a lawyer that makes all the tough times worthwhile.

You Can Help Businesses Succeed in Difficult Times

Did you know that corporations of all sizes need to work with lawyers? It only makes sense when you think about the fact that a big part of being in business is signing agreements and making deals. Even if you’re just negotiating, drafting, or tweaking contracts, business law and other types of corporate law can be highly interesting. You could possibly even go to work for a business that uses attorneys, such as an insurance agency. Attorneys working on behalf of insurance providers are accustomed to dealing with every type of auto accident lawyer or personal injury lawyer, from subdued to aggressive. You could learn tons by getting into this lucrative path.

Of course, you could just as easily end up working as a business lawyer in a more traditional firm setting. Many full-service law firms like to have an attorney on board who can work with corporate clientele. If you like the idea of getting startup entrepreneurs on the right path from day one or assisting an employer in negotiating with a union, you’ll appreciate these pros of becoming a lawyer.

You Can Help Innocent People Who Need Counsel

Watching law-related television and the movies can turn anyone into a raving cynic. Most scripts try to paint characters as not very nice. However, many individuals accused of crimes are completely innocent. They just need someone like you to help them fight against injustice or prove that the allegations against them are false.

For example, let’s say you become a criminal law attorney. Someone calls you for a consultation about your services. The person has been charged with a DUI, which can be a serious offense in lots of states. After the person retains your services, you can begin to see if there might be a way to throw out the charges or to reduce them. Your client should be pleased that you’re working on finding an alternative route to having to pay fines, lose a driver’s license, or even go to jail.

Who else are innocent people who may need assistance? Think of seniors as one potential population in need. One of the pros of becoming a lawyer is that you could potentially offer the elderly or other underserved community members with limited income streams. In Florida, for instance, a Legal Aid Society routinely offers older persons the opportunity to get free advice and counsel. Even during Covid, the Society has made strides to try to minimize the unfairness between some individuals getting representation and some not getting representation because of cost. Thank goodness for teleconferencing!

Though you might not always be able to work pro bono, you could consider providing some services, such as acting like a nursing home abuse attorney, for a reduced fee. Plus, if you’re working solo without the backing of a firm, you may be able to switch up your hourly rates occasionally. As far as pros of becoming a lawyer, that’s a nice one indeed.

You Can Work Hand in Hand With Other Professionals

Every case you work on is bound to be fairly unique. That means you’ll probably spend a lot of time researching information, engaged in the discovery process. If you have a love of learning things that you didn’t know and learning them from experts, lawyering may be a terrific match for your talents.

Imagine you’re on a case that involves a faulty wire seal. Before the case, you might not even have thought about wire seals. Since the case began, you’ve had the chance to work with some experts in the wire sealing world. Similarly, you could end up with a medical malpractice case and need to engage with a physical therapy provider. Not only would you be able to learn more about the inner workings of physical rehab, but you could boost your network of expert witnesses available for future lawsuits and cases.

You can never underestimate the value associated with knowing lots of people from a variety of fields. It’s one of the pros of becoming a lawyer that especially appeals to those who never stop thirsty for interesting fonts of knowledge. Besides, it’s just great to have professional friends.

You’ve probably already heard that lawyers can command good salaries. That’s not untrue, although your paycheck will definitely differ based on your line of work, not to mention the part of the country where you practice. Nonetheless, the pros of becoming a lawyer certainly do include a high degree of job security and steady income.

That isn’t to say that you’ll be researching pontoon boats for sale or investing in a huge deck addition to your home right away. Attorneys don’t start out making tons early in their careers. Additionally, many have staggering law school loans that they have to pay back over five, 10, or 15 years. Expect to put in lots of hours during the first few years that you’re working. Many lawyers clock in at 60 or more hours a week, particularly when they’re trying to prove themselves. After a while, you’ll be able to scale back and live a less hectic lifestyle.

Bonus: You May Be Able to Retire Early

As one of the perks and pros of becoming a lawyer, you should think about what you’re going to do with the money you make. Though numerous lawyers live up to (and sometimes past) their salaries, you don’t have to be so flippant about money. Putting money away every paycheck into an independent retirement account portfolio or employer-based 401(k) with an attractive match could allow you to get on “FIRE.”

What’s “FIRE?” Don’t worry: It’s not scary. It’s just the acronym for a newer saying that stands for “financial independence, retire early.” Though not everyone wants to leave the full-time workforce in their 40s or 50s, some do. And if you’re one of those people, you might like the idea of becoming a lawyer just so you can have a stronger earning power.

True, you can’t get any guarantees that early retirement will be a feasible goal for you if you take the attorney route. Yet it’s a lucrative career that can definitely help you get closer to your dreams of not having to clock in and out until you’re in your late 60s or 70s. If that isn’t one of the pros of becoming a lawyer that motivates you, that’s fine. It’s just worth mentioning and considering.

Are There Any Cons to Becoming a Lawyer?

Since this piece has focused on the pros of becoming a lawyer, you might be wondering if there are any downsides to choosing to earn a J.D. The answer is that there are a few negatives, although they can each be overcome.

The first is that you may find that you’re not ready for the grind after already spending a lot of years in the field. The second is that you’ll end up spending a lot of time away from home and family, which could be important to you if you have a new marriage or young kids. Thirdly, you will almost certainly have to take up some educational loans. And finally, you will need to pass a major examination.

These aren’t reasons not to become a lawyer, nor do they totally negate the pros of becoming a lawyer. You can prevent getting too affected by the cons to becoming a lawyer by taking a few steps.

First of all, before you even apply to a law school, make sure to shadow a working lawyer for several days or even weeks. You may want to shadow different types of lawyers so you get a well-rounded perspective of what working in the law looks like. Shadow corporate counsel. Shadow someone in a private law firm. Shadow a solo practitioner. The more information you can glean upfront, the more you can be sure if being an attorney is appropriate for you.

Think Hard About What Type of Law You Want to Pursue

To be sure, not all lawyers work from sun-up to sundown. Some work in places where they’re less likely to be needed in the evening or during the weekend, except in occasional situations. For example, you may find that working as a lawyer for the government might require you to work less often than working for a high-powered law firm in a major metropolitan city. So be conscientious when considering which type of law will interest you the most.

Tips for Paying for Law School

Any type of higher education is going to cost money. Why take out so many loans that you’ll be in debt until midlife? Instead, look for a law school that fits your needs but isn’t necessarily the University of Pennsylvania or Harvard. Not everyone earns a J.D. at those kinds of pricey law schools. You probably have a law school nearby that will give you a wonderful education but not cost an arm and a leg.

On another note, you could potentially go to law school part-time. You’ll take a longer time to get through all your coursework, but you can spread out the payments. You might even be able to attend a couple of different law schools if the first one doesn’t seem to be the perfect choice for you.

Passing any state’s bar exam usually requires months of studying and planning. After spending time and money to go to law school, avail yourself of classes devoted to teaching you how to pass the bar. It’s an investment that’ll be well-spent because you’ll feel much more confident when you step into the bar exam than you would if you’d tried to study everything on your own and without help.

For generations, people everywhere have been lured by the pros of becoming a lawyer. If you’re looking for a new challenge, or you’re just trying to figure out what to do after graduating from college, consider the legal profession. It might be one of the best moves you make.