Remodeling and Home Improvement Contractor Law: What You Need To Know 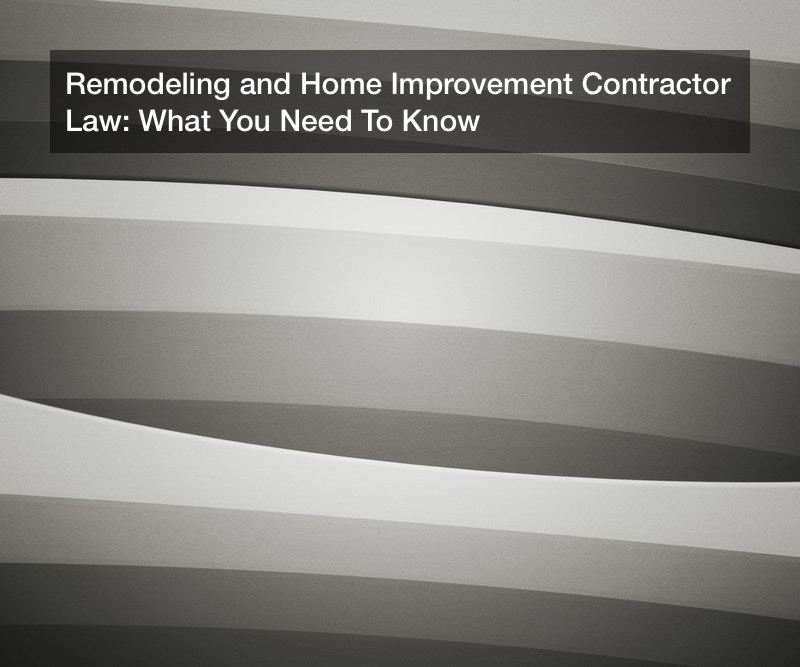 Remodeling and Home Improvement Contractor Law: What You Need To Know

Here are some fields that are included in home improvement contractor law and how they might impact your remodeling project:

A few ways that administrative law could come into play during your home improvement project include:

Another field of law that is included in home improvement contractor law is contract law. A contract is an agreement that becomes legally enforceable if it meets certain criteria including:

A home improvement project could include many contracts including:

If a contractor abandons a job, the contract is breached. But in this case, there is an alternative to filing a breach of contract lawsuit. When a job is not completed by a “bonded” contractor, a customer can file a claim with the surety that issued the bond. A bond is like an insurance policy but any payouts must be repaid by the contractor rather than being borne by the surety.

Property law can come into your remodeling project if you are building near your property line, have covenants, conditions, or restrictions on your land, or hold land subject to an easement. However, in most of these situations, your contractor would rely on you to obtain an accurate survey of your land and the building department to flag any plans that impact other homeowners’ rights.

On the other hand, if you obtain an accurate survey and a building permit, but the contractor makes a mistake while working on your project that infringes another’s property rights, you might end up in court with both your neighbor and your contractor.

In this case, your damages against the concrete contractor would be based on the damages you owe your neighbor for trespass. So, while your case might not exactly arise under property law, your case will be impacted by the interplay of property law and home improvement contractor law.

Product liability cases fall in the intersection between personal injury law and home improvement contractor law. When a personal injury lawyer files a product liability case, the lawyer will likely want to include every entity involved in supplying the product, including the manufacturer, distributor, retailer, and installer. The theory is that they are all liable under product liability law since they made money off the defective product and they can figure out how to allocate the damages among themselves rather than forcing the injured person to do it.

Worker’s compensation is intended to cover all out-of-pocket medical expenses and provide partial wage replacement. These benefits are supposed to make sure that the worker is adequately compensated during the time the injury heals.

Another situation where personal injury law intersects with home improvement contractor law is when a repair is defective and the homeowner’s guest is injured. For example, if a landlord hires commercial building contractors to repair a stair railing and but the contractor failed to repair the railing correctly. If a tenant falls and suffers an injury because of the failed repair, a premises liability attorney would likely file a lawsuit against the landlord who, in turn, would file a lawsuit against the contractor for negligence.

Negligence can also be used when work fails to meet reasonable standards and the work causes financial injury rather than personal injury. For example, if a structure collapses and damages electronics and furniture inside, a lawyer could file a lawsuit against the contractor for negligence. In this case, the damages amount to the value of the property damaged in the collapse.

A first mortgage, or purchase money mortgage, is used to pay the seller when you buy a new home. When you hire a contractor to build a home improvement, you have a few options for paying the contractor:

However, once your home improvement is completed, you will realize many benefits. First, your home value will go up as will your resale price. This could mean that you will make more profit even after you pay off your mortgage and any loans for the home improvement.

Second, much of the profit you make from the sale from a primary residence is tax-free. This being the case, investing in home improvement can be one of the safest places to save your money.

Although it does not happen frequently, home improvement contractor law can include criminal law in a few ways:

Americans are litigious. Americans spend twice as much filing and fighting lawsuits as they spend on purchasing cars. As a result, anything that goes wrong on a home improvement job could result in a lawsuit against the contractor. Whether it arises because of the contract, boundary lines, or personal injury, the customer has many options for making sure that any wrongs are righted.