When to Hire a Divorce Lawyer or Mediator 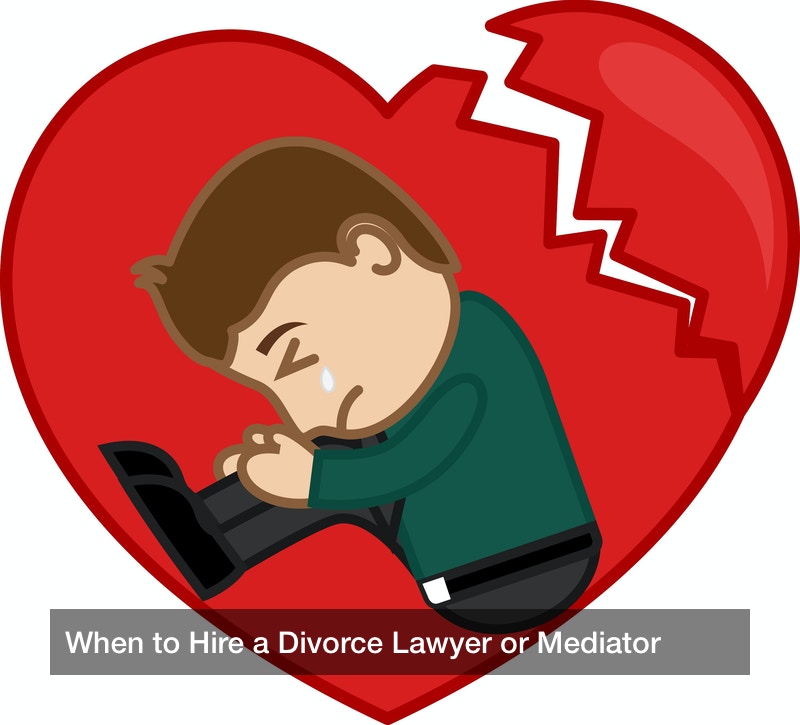 When to Hire a Divorce Lawyer or Mediator

Marriage is one of the oldest and most universal institutions in the entire world, traditionally designed to unite a man and woman into one household that can bear children. Today, some parts of the world have also legalized same-sex marriage, and same-sex households are known for adopting children and raising them. But divorce, the legal end of a marriage, is more common than ever. Many Americans, roughly 40% of all married spouses, end up divorced for one reason or another. When a spouse determines that they must end their marriage, they can turn to divorce mediation services, divorce attorneys, and even child custody lawyers to handle this officially. No one enjoys divorce, to be sure, but a divorce mediation service can make a simple divorce smooth and fair, while divorce lawyers can navigate the complex paperwork of a larger and more expensive divorce.

What might drive someone to end their marriage? Many statistics and surveys are conducted to track marriage and divorce in the United States, and some trends have emerged. Infidelity ranks as the top reason for divorce, when one spouse is unfaithful to the other. The emotional trauma of discovering your spouse seeing someone else can be devastating, and if marriage counseling cannot save the marriage, then divorce mediation or lawyers might come next. Both men and women cheat, but the two sexes don’t always cheat for the same reason.

Meanwhile, abuse is another common reason for divorce, when one spouse is verbally, physically, or even sexually abusive toward other members of the household. Drug use or alcoholism on one spouse’s part may drive the other to seek divorce if the problem becomes serious enough, and substance abuse may drive a spouse to abuse other members of the household. At the very least, substance abuse may lead to personality changes, losing their job, and losing their money to fund their habit.

Not all divorces are so traumatic, however. Some Americans divorce simply because the two spouses realize that they are not compatible after all, and they might have very different lifestyles and spending habits. Trends suggest that two people who date for three or more years before getting engaged are less likely to divorce than two people who get engaged early in their relationship.

Divorce lawyers may be called in for a major divorce case, but simpler ones may not need to go that far. For a simpler marriage and household with few assets, divorce mediation may be sufficient. In this case, a mediator will act as a neutral third party, and their job is to maintain open, clear, and productive communication between the two spouses. The two spouses, instead of hiring lawyers, handle and negotiate the divorce themselves. The mediator will keep communication fair and productive, and draw out good ideas from each party. Mediators don’t actually offer their own advice or input unless asked, though. Another reason to try divorce mediation services is that such services are more private than a divorce court case, and mediators tend to be much cheaper to hire than lawyers and court fees.

Meanwhile, other cases are too big for mediators to handle, and the spouses will hire lawyers to represent them. One spouse, planning divorce, will look up local divorce law firms and consult the lawyers working there (this may or may not incur a fee) and hire one. If the other spouse is abusive in the household, the divorcing spouse may relocate to another, private residence and might even take their under-18 children with them. That spouse might only interact with their other spouse through their lawyer, and they might expect the other spouse to hire a divorce lawyer of their own.

Through their attorneys, these spouses will debate the divorce’s terms and battle over assets such as a home or vacation house, vehicles, bank accounts, or even family heirlooms and jewelry or a privately owned business. For under-18 children, the spouses may also hire child custody lawyers. If the child is age 12 or over, he or she may privately speak with the court’s judge about their preferences on where they live after the divorce. In many cases, a non-abusive spouse with a stable income may win custody (though nothing can be guaranteed here).